The New Printing of Jacobite Banknotes from "The Strange Plate"

The West Highland Museum Fort William has had printed, from the original 275-year-old copper Plate, twenty-two prints of the Jacobite Banknotes commissioned by Bonnie Prince Charlie in 1746.

In February 1746 on his retreat from Derby Prince Charles Edward arrived in Inverness very short of funds. In his view, as a future King, and as a key symbol of the potency of the intended Stuart government, he determined the right to have printed paper money to pay his troops. Perhaps an early attempt at "Quantitative Easing!" 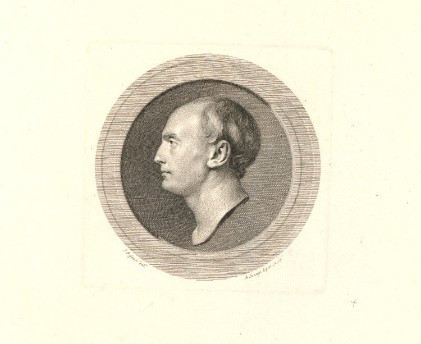 He called upon Robert Strange, an Orcadian Artist and Engraver to produce bank notes of different denominations. Strange described in his diaries how difficult this was with limited materials. However, he had a printing press constructed, engraved the Plate, and was probably about to start production, when on 16th April 1746 the Battle of Culloden saw the destruction of the Jacobite Army and the end of Prince Charles Edward's attempt to regain the British throne.

The Plate disappears from history for 90 years until it was discovered close to a ford on the River Spean in about 1835. BPC had crossed and recrossed that ford in August 1746 during his flight after Culloden. We can speculate that it was lost from his baggage about that time. We know that the Plate came into the possession of the family of General Hugh Ross of Glenmoidart and that he gifted it to Cluny Macpherson just before the General's death in 1864. It first reached public notice in an academic article in 1864, and probably in the 1890's, a handful of prints was made from the plate by the Jacobite scholar Walter Biggar Blaikie. 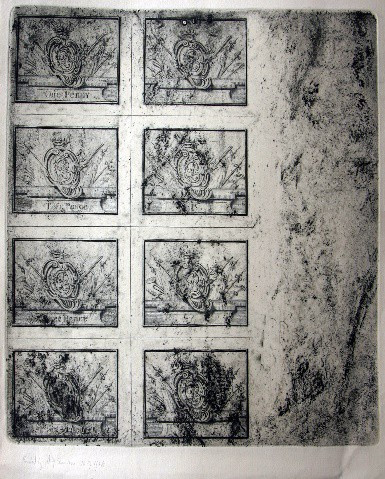 The Plate was acquired by the Museum at the Sale of Cluny's effects in London in 1928. The Scottish Artist D.Y. Cameron was instrumental in raising funds to purchase the Plate and he printed 52 numbered and signed prints in 1928. These prints were sold for 10/6 each to raise funds for the museum. No other prints were made in the last century.

Alastair Clark, Studio Director at Edinburgh Printmakers, has advised throughout the process of printing and has produced 22 prints to celebrate our founding in 1922, perfect for our centenary. 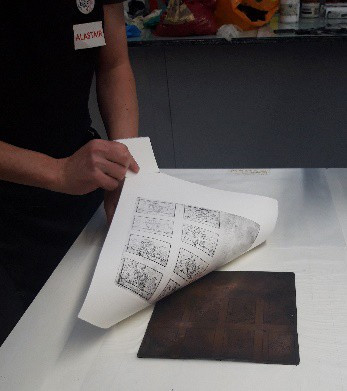 A top-grade etching paper was selected with the retention of the deckled edge on the sheet. The prints were struck by Alastair in April 2021, and they look extraordinary. Imagine handling the actual banknotes created for the anticipated Jacobite world of the mid-18 th Century.

The first of this numbered series will be sold by Public Auction at Messrs Lyon & Turnbull in August this year. No will be unique as the first of the print run and that it is being framed in beechwood sourced from the famous Beech Avenue at Achnacarry, the seat of Clan Cameron.

In 1745 as Bonnie Prince Charlie arrived to raise his standard at Glenfinnan, Cameron of Lochiel was in the midst of planting saplings for an avenue of beech trees near Achnacarry Castle alongside the River Arkaig. He left these bunched closely together and never returned to space them. These trees are now at the end of their natural lifespan and are in decline. By permission of Donald Cameron, the present Lochiel and Chief of Clan Cameron, we have sourced some beech wood from the 1745 avenue to frame the print.

The wood has been milled and fashioned by master cabinet maker Peter Davis in his workshop and has been framed by Gillian Sloan, both locally in Fort William.

A short film has been made by the Glasgow based film maker Jen Martin telling the story of the Plate and the prints production. It will be premiered at 2pm on Thursday 15 July at the online Zoom event with the University of St Andrew's Open Virtual World team and will afterwards be available on the West Highland Museum and Lyon & Turnbull's website.

You can register for the Zoom event, "The Strange Plate of Bonnie Prince Charlie" on Eventbrite.

The Museum will be retaining five prints for our own purposes.

Sale of the Prints:

Details of how to obtain a Print are on the front page of the Museum's Website.

Number one only will be framed and sold at Lyon & Turnbull in Edinburgh on Wednesday 18 th August.

One unframed Print will be available for a Raffle. Virtual Tickets will cost Ł10 and can be purchased in multiples. Due to Covid restrictions there will be no paper raffle ticket issued.

Payment for the Raffle, which will be seen as a donation to the museum, can be made:

Please be sure to leave your name and email address as a reference.

Whilst the Raffle is in progress, all donations of Ł10 or multiples thereof through the website will be entered into the Raffle for the Print.

If you are unable to pay using these methods, please contact the museum.

The West Highland Museum will collect the names of all participants, give each a number (or numbers with multiple tickets), and email a receipt.

The Raffle will close, and the winning number established by an automatic number generator on Tuesday 7th September at 12 noon at the West Highland Museum.

After the sale of No.1 by Auction, the price will be announced for the sale of the remaining 15 unframed prints and will be published at 12 noon on Friday 27th August.

If you are interested in purchasing a print please register your interest with your name, address, telephone number and email address by emailing info@westhighlandmuseum.org.uk *

If you have registered an interest, we will email you on the afternoon of Friday 27th August with the purchase price.

In the event that you wish to buy at that price we will ask you to confirm your interest immediately. The list of interests will close at Midday on Friday 3rd September.

The West Highland Museum houses a nationally important collection which includes a number of unique Jacobite pieces in its collection including the "Secret Portrait", the Prince's tartan trews, Jacobite glass and miniatures, books and other memorabilia.

All proceeds from the sale will go to support the West Highland Museum which has just recently reopened to visitors.

*We would like to hold your email address to inform you of occasional events and opportunities at the West Highland Museum. If you do not wish us to do this, please let us know.