A GLIMPSE INTO THE HISTORY OF THE WEST HIGHLAND MUSEUM: THE 1925 JACOBITE EXHIBITION 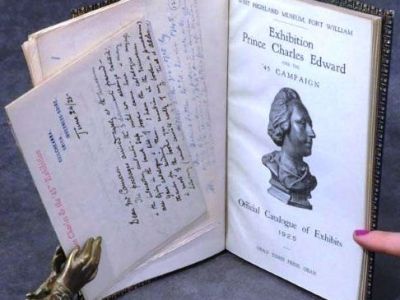 A relic of the museum’s early days in Fort William was donated back in 2013 when it turned up in a bookshop in Western Pennsylvania in the USA.

It’s a finely leather bound catalogue of the exhibition held in the Summer of 1925 by courtesy of the British Linen Bank – the very first exhibition in our present building. This copy of the catalogue belonged to one Duncan Grant and tucked inside is a letter from our founder Victor Hodgson thanking him for sending the packages which arrived safely “which are lying in the bank safe until we arrange the Exhibition”. “The catalogue of the exhibition is disgracefully late getting to the Oban Times Office for printing – (People have been slack in letting me know what they were really going to send….)”

Together with a list of books donated is a flyer for the “Prince Charles Edward & the ’45 Campaign Exhibition” with a letter from the then Chairman – Dr.  A.C. Cameron Miller, local Medical Practitioner.

The letter requests support “in the shape of gifts of suitable objects and contributions of money, not only to cover any excess expenses of the Exhibition…, but in order to purchase as a permanent home the building in which it is held” – things don’t change!

The 59 page catalogue lists 416 items gifted or loaned to the museum for the exhibition, including a total of eight separate rings and brooches containing locks of Prince Charlie’s hair – perhaps the Queen was close to the truth when on her visit to the museum in 1995 she retorted “if every lock of his hair I’ve been shown is genuine the poor man must have been completely bald”!

The Secret Portrait is there “which was probably used on the table when drinking toasts, the portrait of the Prince only being exposed when all the company present were known to be loyal Jacobites”.

The Strange Plate,  used in an attempt to print banknotes in 1746 (an early example of  “Quantitative Easing) is not in the exhibition – but a print from the plate was on display. The plate itself was bought in 1928 for the museum from the effects of Coln. A.C. MacPherson of Cluny.

Donors and lenders to the Exhibition included Lochiel, Miss Alice MacDonnell of Keppoch, other museums, auction houses and libraries, and a host of other private individuals. Much of the material was already “The property of the West Highland Museum, which our founder however admits in relation to (at least) the library “consists really of my books and purchases”.

What generosity of spirit in time and commitment! “The Museum serves not only Fort William, but the whole of the Western Highlands”.  One would like to think that Victor Hodgson’s vision of a “Museum Service” continues 98 years after he founded the museum.