Journey of a Christening Dress

In September 2021 Jan Manos, a museum professional from the United States, got in touch with us to offer us a very special gift.  This beautiful Christening dress was given to her 3rd great grandmother, Mary Morey MacColl, by Lady Appin’s daughter, Ann Stewart.  We were delighted to receive the robe into our collection in November 2021 and plan to display it in the museum in 2022.  Here Jan explains the remarkable history of this Christening robe.

“So, how did a Christening dress made in Scotland over 200 years ago find its way to Madison, Georgia USA?  Our journey begins with the dowager “Lady Appin” of Ardsheal House, in the parish of Appin, County of Argyll, Scotland.  She was the last of the Stewarts of Appin.  The Christening dress was made in Scotland and belonged to the dowager Lady Appin’s mother who had it made for her as a baby.  The old lady had her daughter Ann baptized in it, also Ann’s four children were baptized in it.  The history is that the embroidery on the dress was hand-made in India.  Mary Morey MacColl, the first owner of the dress in our family, made the little petticoat.  This kind of Christening dress was first seen in Scotland in the very early 1800s.

In Scotland, many families allied with the Stewarts, one such family was the MacColl Clan.  Many MacColls fought and died for Prince Charlie in an effort to regain the throne of Scotland in 1745.  My 3rd great grandfather was John MacColl.  His home was within a half-mile of Ardsheal House, home of Lady Appin.  The census shows that John MacColl was the grounds supervisor of the large estate from 1841 when he was 30 years old, until 1891 when he was still working there at 84 and shown to be a widower.  During John’s service at Ardsheal, in the early 1870s, there was a political uprising of sorts.  The dowager’s husband was killed in a duel.  She was left alone and was stripped of title, money and possessions, falling almost completely into poverty.  The old Lady of Appin had a daughter, Ann Stewart who, over the years became a best friend to John’s wife, Mary Morey MacColl, my 3rd great grandmother.  When Mary MacColl’s daughter, Anna MaColl McGaw (My 2nd great grandmother) was pregnant, Ann Stewart passed the family Christening dress on to Mary, for Anna to not only use but to keep. 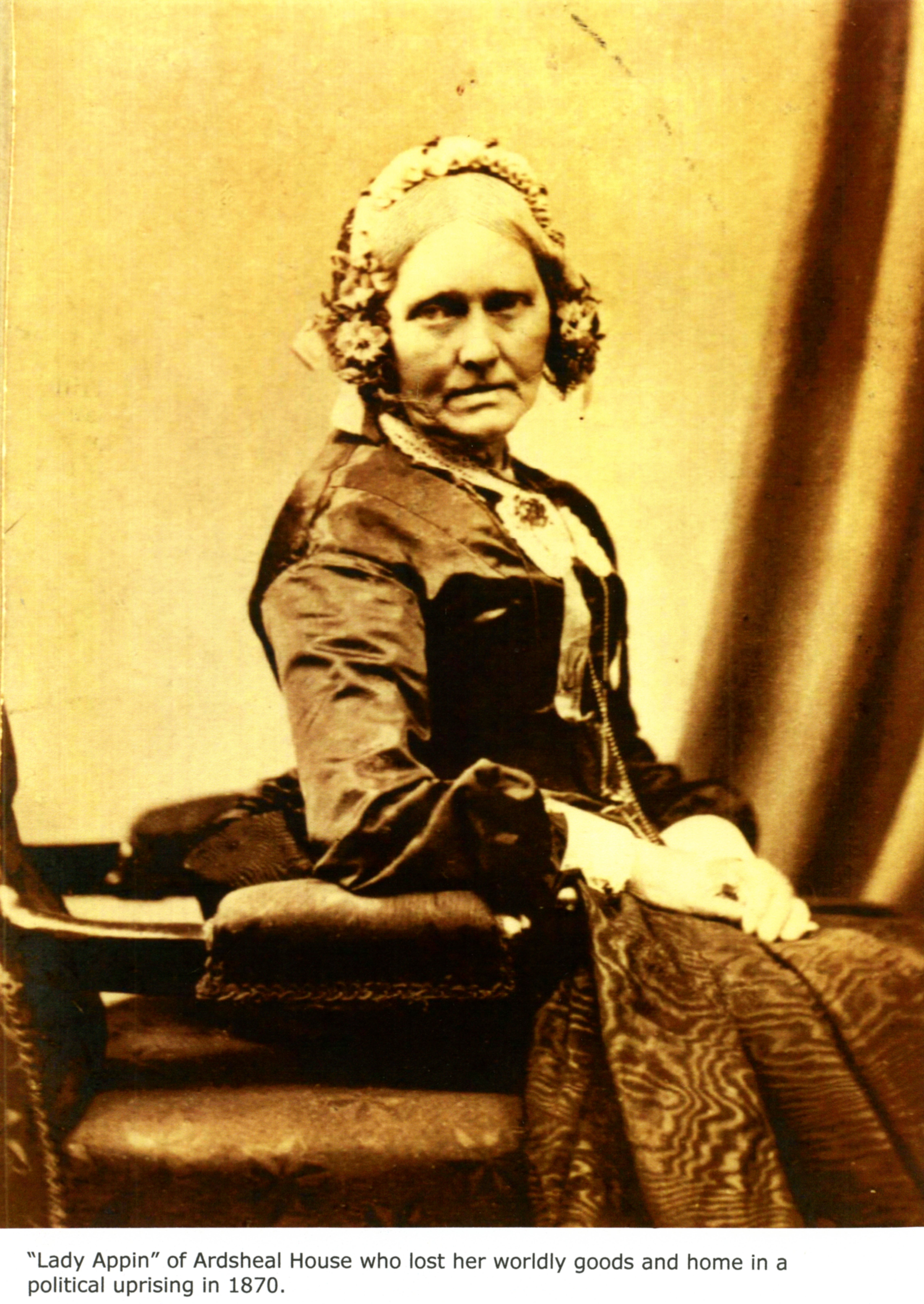 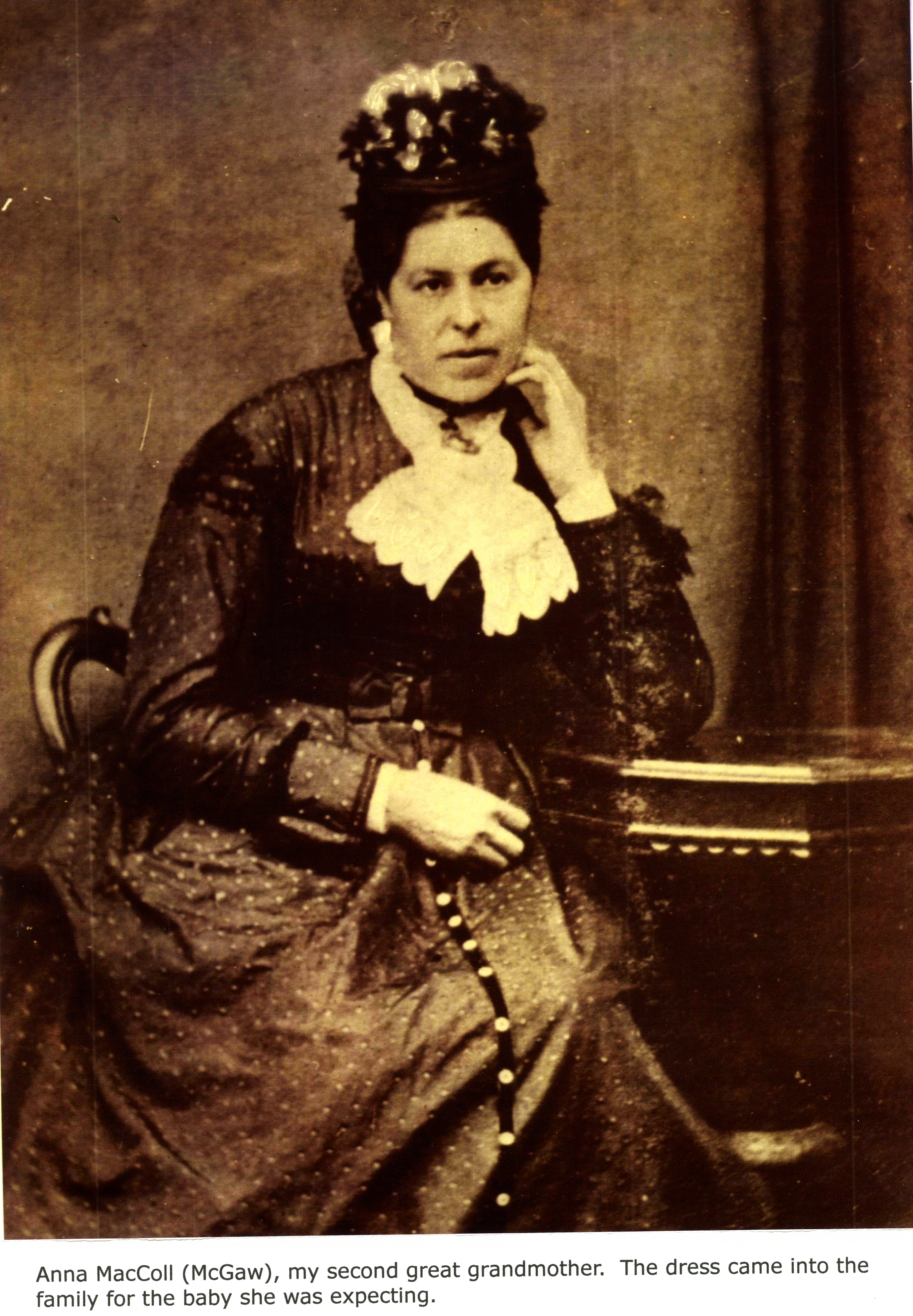 You see, at this stage of Ann Stewart’s life, she was trying to salvage many cherished family items as we all do.  It was during the 1870 uprising that her mother was literally evicted from Ardsheal Cottage and family belongings had to be removed from the house.  At this point, with nowhere to go, the Old Lady of Appin was taken in by pregnant Anna MacColl and her husband William McGaw, my 2nd great grandparents, because her own daughter had married a military man and they were assigned foreign duties and the mother was too old to go.  The old lady lived with them for 20 years!

The Christening dress that was given to Mary MacColl by Ann Stewart was given to her pregnant daughter, Anna McGaw, to use as a christening dress for her new baby.  That baby was a girl, Mary Maitland McGaw who was born November 29, 1870 in Duror, Argyll, Scotland.  She grew up and married Angus Robertson, Sr.  Those were my great grandparents.  Once the dress entered into the McGaw and Robertson family lines, every child has been baptized in the dress. All six of the children of Mary McGaw and Angus Robertson Sr. were baptized in the dress while living in Ballachulish, Scotland, near Ardsheal Cottage.  Their home, built by Angus, Sr., a stone mason, was named Craigallen.

In 1909, Angus Robertson, Sr.’s family moved to Canada for more opportunity.  Their second son, Angus Robertson, Jr. was my grandfather who was only 12 when they moved.  At age 17, he began a three-year correspondence with a young girl living in Palo Pinto, Texas.  The young girl was my grandmother, Beth Whatley, an aspiring writer – they met through an advert my grandmother had placed hoping to find a pen pal.  Angus and Beth were married and soon they were expecting their first child.  My mother was born March 20, 1920 in Mineral Wells, Texas and soon afterwards Angus and Beth brought their baby daughter to Canada to meet her Robertson grandparents and to be baptized in the dress.  The same dress in which her father and his mother were christened.  Eventually all three of Angus and Beth’s children were christened in the dress.  Over the years the dress passed back and forth to Robertson relatives both in the U. S. and in Canada.  My mother eventually was given possession of the dress.  All three of her children, my sister Carol, me and my bother Eric were baptized in the dress.  My mother asked me to become caretaker of the christening dress when she broke up her housekeeping.  Both my children were baptized in the dress and my three grandchildren have been photographed in the old gown as well. 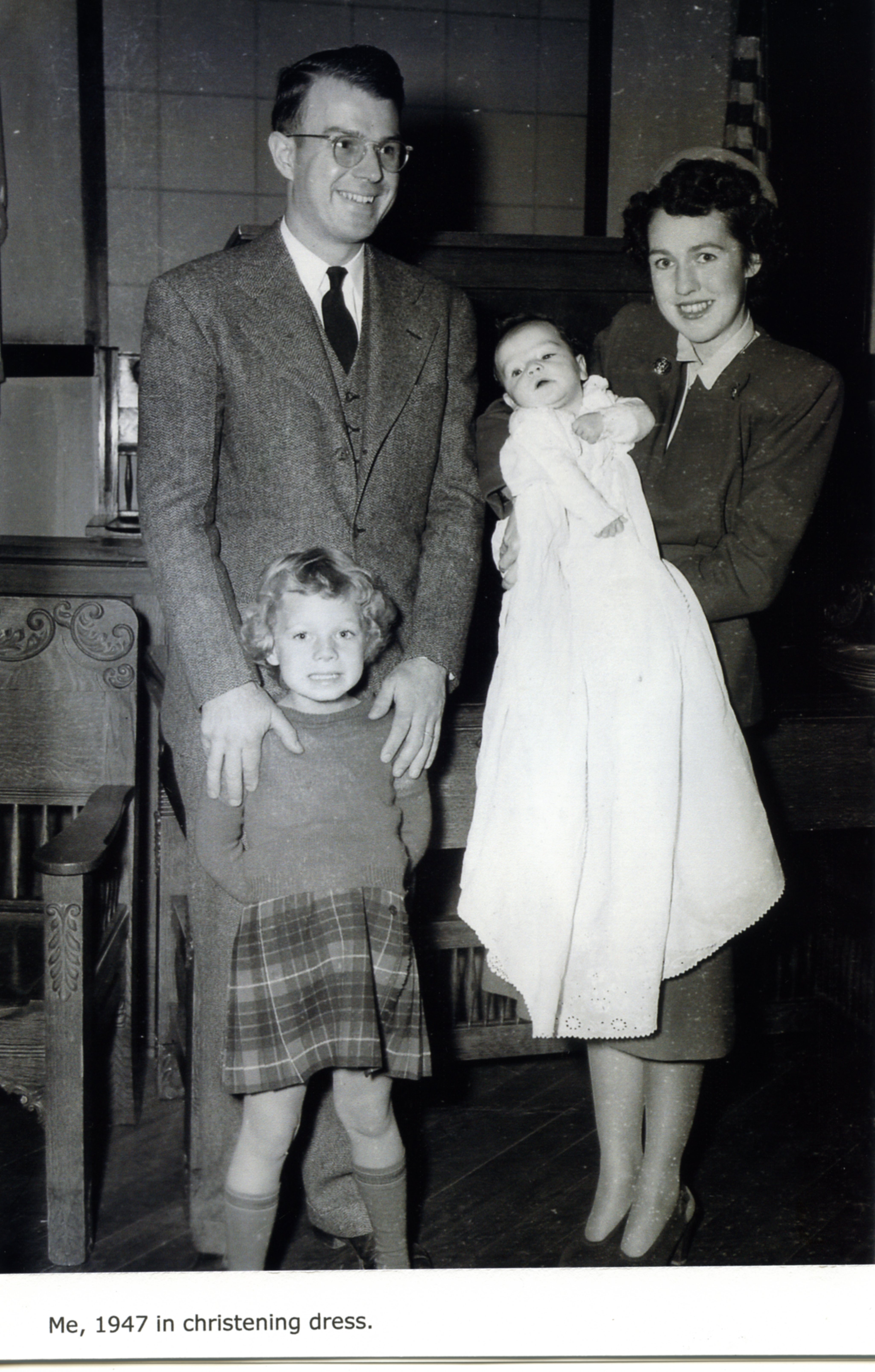 As a side story, in the 1980s or 90s, my mother was asked to send the gown to Canada for a Christening and when it was returned it was blue!  They had washed it and added bluing to brighten it and I thought – it is ruined.  There seemingly was no cure for removing bluing, not even bleach.  In 2006 in a trip to Ireland, I discovered a charming shop in Kenmare called the White House.  They only sold antique clothing that was white.  I happened to simply ask her if she, by chance, might know how to remove bluing.  She told me to take the garment and dip it into a solution of ammonia and water and put it into an airtight container.  Leave it overnight.  If you wake and it is still blue, nothing can be done.  I was thrilled to see it was once again white when I awoke.

I have decided the old dress has come to the end of the line.  I cannot even imagine how many babies have worn it over the past two centuries.  It is simply too fragile to be used any longer.  I found the West Highland Museum were able to accept this old treasure as part of the local history, so I boxed it up with all the information and photographs so the story and dress can live on for others to see.”