Fort William’s friendship with the Objiway

In July 2020 we had an enquiry about one of the more unusual objects in our collection. Tucked away in our attic store is a deer skin scroll inscribed with a message of friendship from the Ojibway people.  It was presented to the Provost of Fort William in 1937.

The scroll was gifted to the museum by Provost Simon MacDonald’s great grandson.  We had little information at the museum about the scroll, so it was fascinating to hear from his family about Simon MacDonald’s life and how as a representative of Fort William he had forged bonds of friendship with the Ojibway.

Simon MacDonald was elected to Fort William Town Council in 1910.  He served as Provost for the Burgh from 1932 – 1941 and also as Justice of the Peace.  During his time in office he was instrumental in forming closer links with Fort William, Ontario (now Thunder Bay).

In 1936 Simon travelled on the Queen Mary’s maiden voyage to New York and then on to Canada to convey messages of greetings from Fort William to the mayor of Fort William in Ontario.  Simon travelled around Canada often catching up with Lochaber emigrants who had settled there.  However, according to his grand-daughter, Margaret Weir (nee MacDonald) writing in 1999: 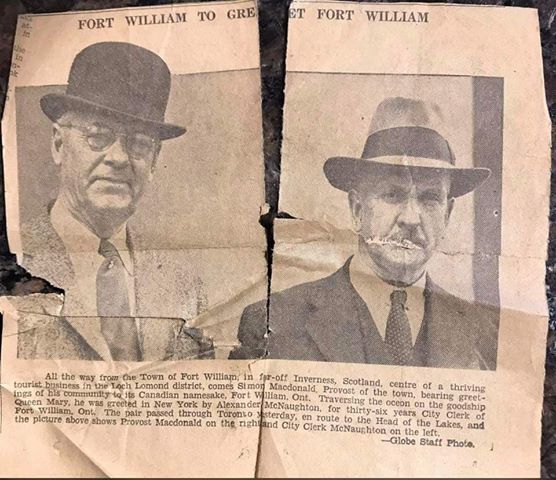 “The highlight of grandfather’s time in Canada came with a visit to the tribe of Ojibway Indians.   The Objibways, once a powerful tribe, with vast territories around the Great Lakes and further to the west, were trying desperately to preserve their heritage and culture.

They were so impressed by their visitor - who arrived in full Highland dress and told them so much about Fort William and the Highland way of life - that they decided to name him as an honorary chief of their tribe ensuring a “Brotherhood” between the Objiways and the two Fort Williams.”

Simon was given the title Big Chief across the Great Waters

In 1937, Mayor Pow, the mayor of Fort William, Ontario arrived in Lochaber on a reciprocal visit.  With him he brought an Indian headdress, a pipe of peace and a message of friendship written on a deer skin scroll from the Objiway.  Mayor Pow had participated in a Objibway ceremony and been initiated into the tribe in order to be able to present the gifts to Provost MacDonald.

According to Margaret Weir the presentation took place in the third week of April 1937 at the Playhouse in the High Street.  As a child she remembered the occasion well with the stage decorated in a Canadian scene complete with tall poplar trees, Indian teepees and burning campfires. She remembers little about the long speeches given by the dignitaries which she said bored her as a child, so she went to play!

The deer skin scroll came into the care of the museum in 1997 when it was gifted to us by Simon MacDonald’s great grandson. The fragile traditional headdress pictured sadly did not survive our climate, and the whereabouts of the pipe of peace is not known.