Toasting the Prince with the Drambuie Collection

The 31st December 2020 marks the 300th anniversary of the birth of Prince Charles Edward Stuart.  To commemorate this special occasion the West Highland Museum has organised a series of articles written by scholars, academics, authors, and Jacobite enthusiasts.  In this third in the series Andy Fairgrieve, Artists in Residence Co-ordinator for William Grant & Sons Distillers Ltd, takes a look at the Jacobite drinking culture.

A’ health they cried, to witching eyes

Of Kate the landlord’s daughter

That grows best over the water

Later this month, in a tradition going back to the 18th Century, there will be still more than a few glasses raised across the world to toast the birthday of Charles Edward Stuart, known as Bonnie Prince Charlie.

Perhaps as the drink flows there could arise a few discussions on what might have been if things had turned out better for the young adventurer. Debates may be heard on the validity of his endeavour or against it? Were the Jacobites’ progressive or simply adherents to an outdated system of Monarchy? But one thing that can surely be agreed upon was that the Jacobites enjoyed a good drink; indeed it has been observed many outwardly respectable pillars of 18th Century society were Jacobites when drunk but Hanoverian when sober!

It is fitting, therefore, that at its core, the Drambuie Collection comprises one of the largest collections of 18th Century Jacobite sympathy glassware in private ownership. The collection, which also includes works of art, documents, weapons and other artefacts, was built up by the MacKinnons who were the previous owners of the Drambuie Brand. However, at the end of 2104 the collection was transferred from one family-owned company to another, when the Drambuie brand was sold to distillers William Grant & Sons to complement the company’s already impressive portfolio of brands.

Since then it has been my privilege to act as the custodian of the collection and my aim has been to get as much of it out of storage and on to display so it may be enjoyed by a wider audience. At the start of 2019 I was delighted to finalise the loan of a number of objects from the collection to the West Highland Museum to complement the outstanding collection of Jacobite period items they already have on display.

William Grant’s family connections to the Jacobite cause can be traced back to the ‘45 when his great grandfather Alexander Grant (known as Auld Cearnach) and his two brothers William and Daniel fought on the field of Culloden Moor for the Prince. Unlike many of their comrades in arms, the three brothers managed to survive the carnage and escape back to Speyside where ‘Auld Cearnach’ lived up to his name by reaching the grand age of 103. It is said that he never spoke of his time with the Prince without first going to the door to check no eavesdroppers were in earshot. No doubt his tales became more animated and dramatic with a wee dram to hand, however, it is unlikely the dram was served in such glassware as can be found in the Drambuie collection.

These beautifully crafted and decorated glasses were high-status items and while the exact providence of most contained in the collection is unknown, it is likely they were used at one of the many Jacobite clubs that existed, in some cases, at least to the end of the 18th Century. In fact, many were only founded after 1745, yet research shows that of the 109 clubs so far identified, only 13 were thought to exist in Scotland.

One particularly rare glass, currently on loan to the West Highland Museum, is decorated with a five- colour enamel portrait depicting the Prince. It is thought to have been one of a set of six gifted to an Edinburgh Jacobite club, the Steuart Club, by the 9th Earl of Kellie, Thomas Erskine. This club met annually to dine and celebrate the birthday of the Prince up until December 1787 when Robert Burns was said to have been one of the guests. Of course, portrait glasses such as the ones used by the Steuart Club clearly showed the club’s affinities – but others were slightly more cryptic in their decoration. White roses, the symbol of the Stuarts – open, closed and away to flower – were common decorations on Jacobite glassware. They are thought to depict:

Other common designs, such as moths, north stars, withered oaks, thistles and oak leaves, all come with coded explanations of support for the Jacobite cause and signify expressions of a desire for the restoration of the Stuart Monarchy.

Looking at the glasses today, the most striking aspect of them is the generally small size of the bowls in comparison to drinking glasses of the present day – around 35ml compared to 150ml. It seems strange that a culture that loved drinking so much would present itself with such miserly measures, yet these small capacities might make more sense when we realise that some Jacobite drinking clubs might raise over 30 toasts in the course of an evening!

There is, however, one glass again on loan to the WHM with a much larger capacity. It is decorated with:

This large glass is thought to have been a communal glass passed around members of a Jacobite Society as described in the practice of the Board of Brothers, a London-based society who drank from ‘The Great Glass’.

One of my favourite types of glass in the collection are those known as ‘Firing glasses’. These are usually small trumpet=shaped bowls set on short sturdy stems with an extra thick and wide base. As the glasses were drained, they were slammed down on the table, creating a sharp report like musketfire, hence the name Firing Glass. Perhaps they were a forerunner of today’s shot glasses? Again, a fine example from the Drambuie collection can be seen at the WHM. Sitting atop a short multi-enamel twist stem, the bowl depicts a withered oak: a symbol adopted by Jacobites to remember the Boscobel Oak that sheltered Charles II after the battle of Worcester. It is also engraved with the word REVIRECIT – ‘it grows green again’ – referring to the hope that the King over the water would return.

Of course, the references to the King over Water could be invoked without the use of any special glass but by employing gestures such as that practised by another London-based club, The Independent Electors of Westminster. Here the drinking glass held in the right hand was passed over a water glass held in the left when the toast was raised to the King (over the water). Such gestures could be used when in mixed company by passing the toasting glass over the water or punch bowl, leading to water bowls in Hanoverian households not being placed on the table until the toasts had passed up until the later 19th Century!

Secret gestures had to be employed as toasting the wrong King could be seen as a treasonable offence. Since the days of Charles I it was customary to toast the King when on bended knee. In 1715 a British Army officer, Captain Silk was imprisoned for 18 months for taking the knee when toasting the King. This led to a number of disguised toasts being invented. Those loyal to the Stuarts might toast Miss Clarke and her friends, Miss Clarke being a young woman from Sunderland who was fined for toasting King James in 1718. One of my favourites has to be ‘Health to Sorrel’. Sorrel is  the name of the horse who stumbled on a molehill while carrying William of Orange, throwing him to the ground and breaking his collar bone, leading to pneumonia that brought about his death. An added delight to this unfortunate mishap for those raising the toast was, of course, that Sorrel had been confiscated from a prominent Jacobite, Sir John Fenwick. The mole who played a part in William’s demise is also remembered in another popular toast – To the small gentleman in the black velvet waistcoat!

Songs, of course, were also a popular pastime while drinking with the same disguised tropes being carried over as in the lines above. However, as with the toasts, a degree of creative invention was used to help convey a message of loyalty to those who knew the code like those contained in the lines of the popular Christmas Carol ‘Come all thee faithful’. 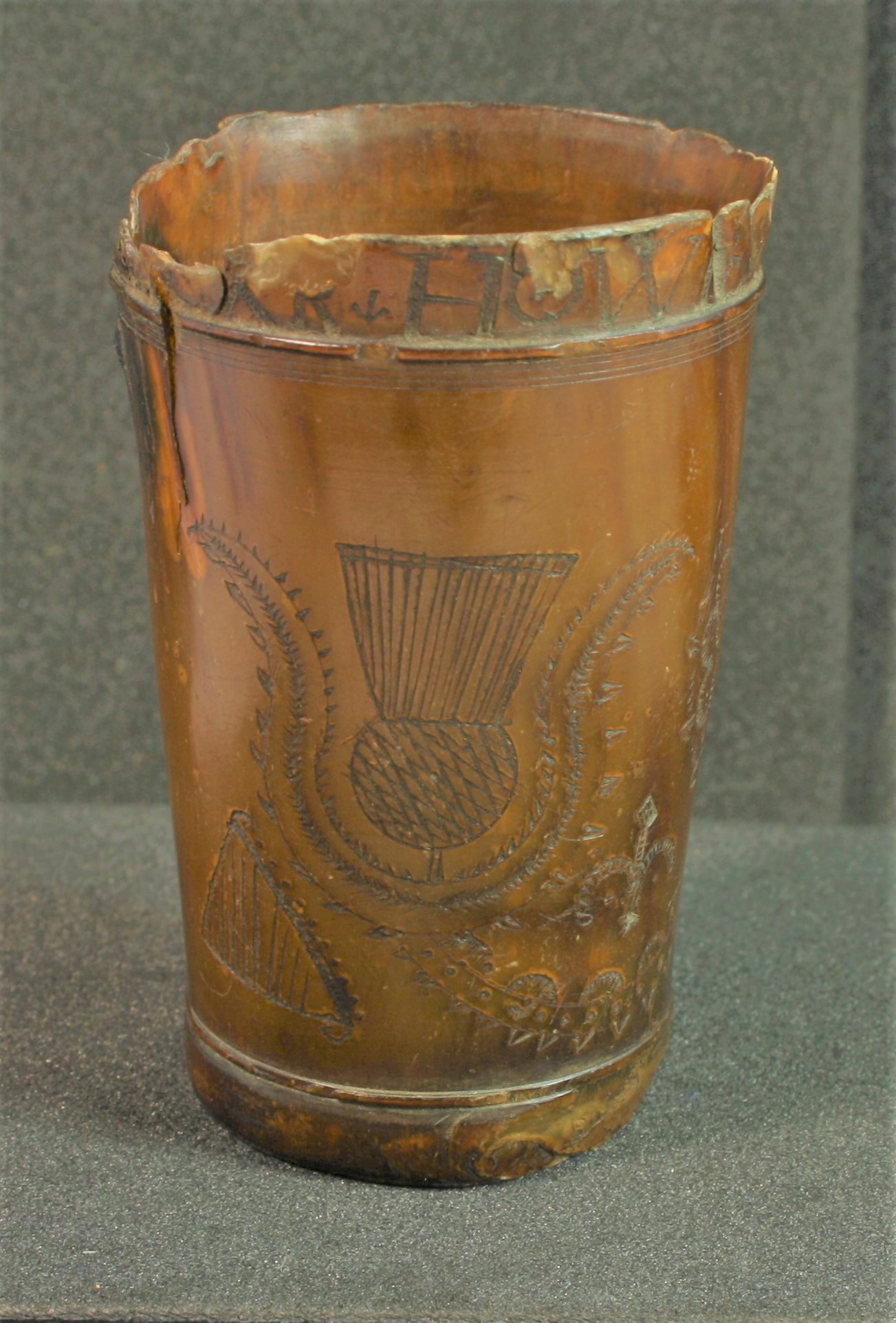 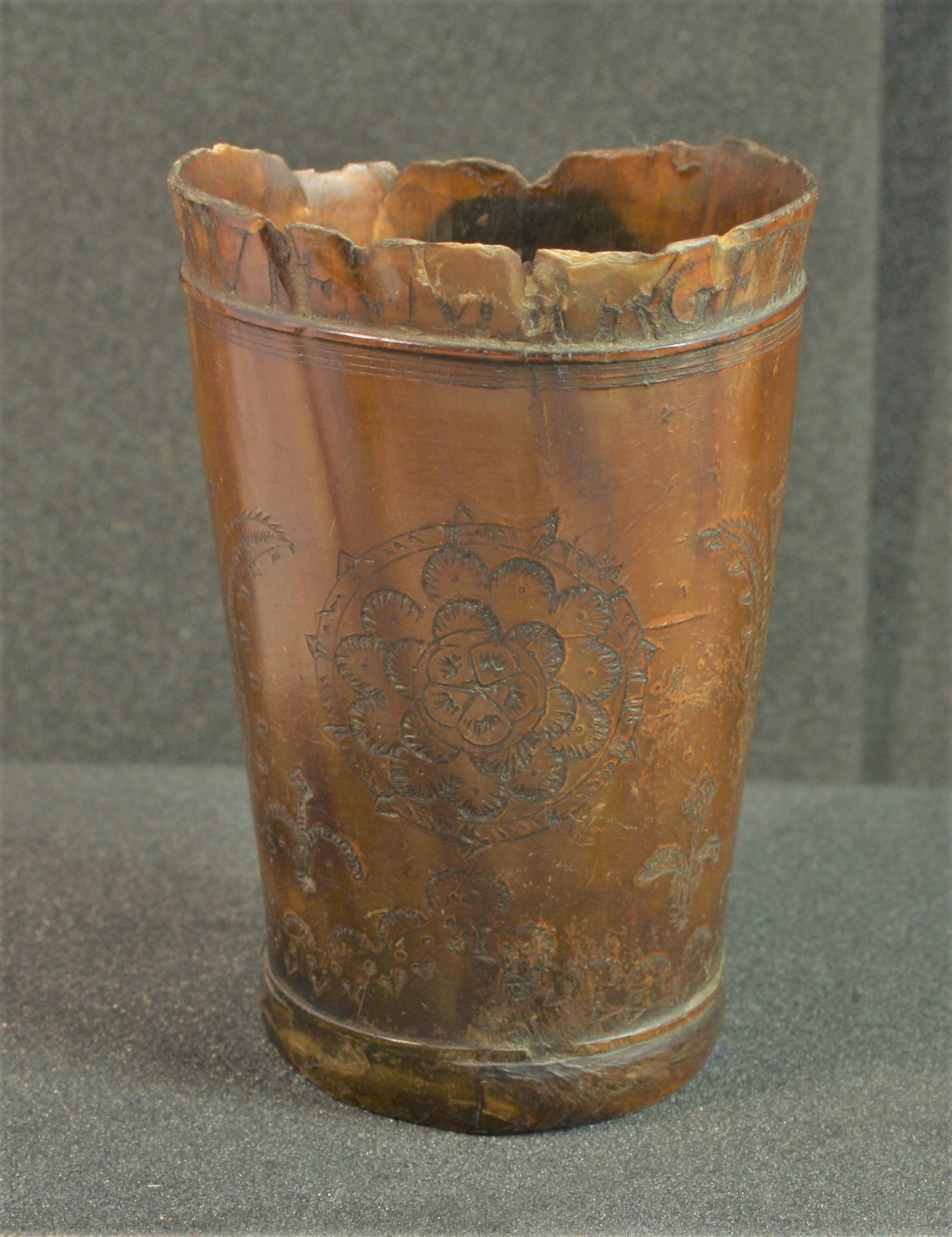 Finally, returning to ‘Auld Cearnach’ and Speyside, it is more likely he enjoyed his drink to the health of the King over the Water in a more humble vessel than the ones described above. Perhaps in a small hand-carved Quaich or even a cup fashioned from cow horn such as one also in the Drambuie Collection. Embellished with thistles and Jacobite roses, this is the drinking vessel of the commoner. You can almost imagine the owner sitting by the fire carefully carving decorations in to the horn with a dirk. Tantalisingly the rim of the cup – which looks as if it had a handle attached at one time – is badly worn, leaving only a few of the letters carved centuries ago legible. These read ‘How … rgret Alex’. But what would have the cup contained? Well, fine wines and spirits smuggled from France were very popular – not just because of their quality, but knowing no excise duty had been paid to the Hanoverians made them even sweeter. Again these exotic brews might have been more the preserve of those who could afford fancy etched glassware. For ‘Auld Cearnach’, the tipple of choice would likely have had less of a journey to his cup than the fine imported clarets of the better off as, of course, Speyside was then a hot bed of illicit distilling. Just another way of having your drink while cheating the Hanoverian King out of his shilling.

So, whatever your tipple of choice (of course I would advise a good Rusty Nail, which is part Drambuie and part Grant’s Whisky), let’s raise a glass to ‘Auld Cearnach’ and his like while never forgetting the white, white rose that grows best over the water!