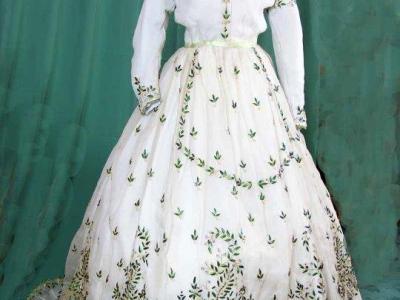 There is a dress on display at the West Highland Museum which has fascinated me for several years, as it seems somewhat out of place, especially considering that the museum’s collection doesn’t include many objects which were made outside of the Highlands, or Scotland for that matter.

During lockdown, many folks have found themselves with plenty of extra time on their hands so I decided that I would like to try and find out more about the lady who owned this dress. First, let me describe the dress to you and why it is such an important item in the WHM collection.

This dress is made from a lightweight but firm cotton fabric and is beautifully embellished with silk embroidery and beetle wings.  Yes, you read that correctly, beetle wings.  The elytra of the jewel beetle to be precise.  These wings have been used for centuries in the highly elaborate embroideries of the far east and are still collected today.  Adult jewel beetles have a very short life span of 1-3 weeks only.  The elytra are collected after the beetles have passed away.

There was a real fashion amongst the wives of British military officers stationed in India during the latter half of the 19th century and into the early 20th century of commissioning dresses in Western styles but made from the thinner fabrics (such as muslin) which would be more comfortable to wear in the heat of Indian summers.  Thanks to the existence of fashion plates, books and photography, dress historians today are able to fairly accurately date dresses to within a year or so from this period, so after some research I was able to conclude that this dress was probably made around 1868-9 due to the style of the bodice and the skirt, and very similar surviving dresses which are held in other British museums (at the V&A and Cheltenham, to be precise).

Vanessa, our curator, was able to share with me that this dress once belonged to a lady called Barbara Morrison who had been born in Inverness in about 1828, had married an (unnamed) British officer and went to India aboard the Himalaya.  They had met in Jersey. Not huge amounts to go on, but certainly more information than is held about some of the other items in the collection.

The single thing I love the most about studying history is finding out about the lives of folks who have lived before us, their lives, their experiences, their stories.  And I love how we can learn so much from surviving objects too.  So, I decided I was going to use my experience of researching my family tree to see what I could find out about the original owner of this dress.

I started my research on the fantastic Scotland’s People website.  This is the best resource to go to initially when trying to find information about an individual in Scotland.  The website is run by the National Records of Scotland (our national archives) and you are able to download copies of original certificates (for a fee).  Alas, I did not find any information for Barbara Morrison – neither a birth nor marriage.

So I then decided to have a look at the fantastic British Newspaper Archive to see what I could find out about the SS Himalaya.   Sure enough, it had indeed transported officers and their wives to India in the late 1860s, so I knew I was heading in the right direction.

Then to Find My Past which confirmed that a Barbara Morrison, who had been born in Inverness, had married a William FitzHenry, in December 1856 and in Jersey.  I was able to see on their marriage record that he was a Colour Sergeant with the 60th Regiment of Foot at the time of their marriage so I then went to check if the 60th Regiment had served in India during the 1860s.  I did this by looking at the fantastic newspapers from the time (there is one newspaper in particular, the Homeward Mail from India, China and the East which I have found particularly fascinating and useful) on the British Newspaper Archive and then backing this up with the Official Army register (on archive.org).

The third battalion of the 60th Regiment of Foot had been serving in India since 1857, with the regiment's stores based in Winchester.  In 1857, William Fitzhenry was a Colour Sergeant attached to the stores in Winchester.  He became the Quartermaster in July 1867 and then was posted to India.  Only officers and ranks above were allowed to take their wives and children to India with them, which explains how Barbara had this dress.

The third battalion served in Madras (today called Chennai) during 1868 to 1869.  The style of the zardozi embroidery on the dress also hints that it was most likely made there as well; the way the silk threads are wrapped with silver wire is something that was quite particular to the Madras area at the time.

William, Barbara and their one-month old daughter did indeed travel part of the way to India aboard the HMS Himalaya, which was the largest ship in the world at the time, had space for 3000 soldiers and luxury first class cabins for officers and their families.  They were on the second ship to take the journey to the north of the Suez Canal, and complete part of the journey over land.  This saved months off what used to be an incredibly long journey around Africa.  The Suez Canal opened in 1869, and they returned on the HMS Serapis from Aden at the end of 1872, through the Suez Canal.

The dress was altered in the mid-twentieth century, most probably for a fancy dress costume.  The lady who donated the dress to the museum altered the bodice of the dress, lined it with synthetic material and part of a bedsheet, and cut away the original waistband.  Her daughter has recently found a photograph of the dress before her mother had made the alterations, and this will displayed alongside the dress.

I still have many unanswered questions relating to this dress and its owner, which hopefully will be answered onoce it is possible to visit the British Library's India Office archive.