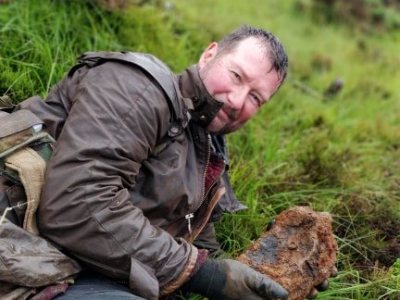 As part of the 2019 Highland Challenge, I brought our participants to Fort William, where we met with members of Lochaber Archaeological Society.

We hiked up to a position on Sugar Loaf Hill, which overlooks the old Fort and where from late March to early April 1746, Jacobite artillery put the Fort under seige.

The seige of Fort William lasted around two weeks and saw a great exchange of cannon and mortar on both sides, only about two weeks before Culloden.

Captain Scott was an Army officer in Fort William who parleyed with a French drummer sent on behalf of the Jacobites and commanded further troop movements throughout the seige. This was the same Captain Scott who had been ambushed at Highbridge near Spean Bridge as he led two companies of Sinclair’s Royal Scots Foot towards Fort William as reinforcements. Scott and these troops had then been taken prisoners by Macdonalds of Keppoch and Glengarry following the first shots fired on 16th August 1745.

We were quite successful in recovering an amount of cast-iron mortar fragments, last seen sailing through the air from British Army artillery towards the Jacobite positions.

The size and weight of these fragments brought the force of the conflict here to immediate light and vivid reality, painting a dramatic and bloody picture of one battle of the Jacobite Risings.

Paul MacDonald is a sword maker, master-at-arms and owner of MacDonald Armouries in Edinburgh